Hydrogen fluoride (HF), better known as hydrofluoric acid, is one of the basic
raw materials for a wide variety of both commercial and industrial products.

The main application for hydrogen fluoride is in the manufacture of
fluorocarbons. Around 60% of HF manufactured world-wide is used in this
area.

It is produced by reacting a naturally occurring mineral, fluorspar, with sulphuric acid. HF is a strong corrosive acid which must be handled with extreme caution. Safety is therefore the primary concern of both producers and users.

The major activity of Eurofluor (CTEF) has been the issuance of recommendations on the safe handling of hydrofluoric acid during production, storage, transportation and use.

The socio-economic importance of the fluorine industry

Around three hundred people are directly employed at nine HF production sites in four European countries. It is estimated that the total number of jobs related to the fluorine industry, including downstream products, amounts to more than 50,000. 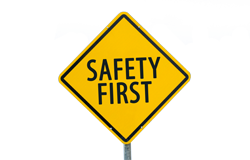