Hydrogen fluoride is used as a catalyst in the production of detergents. The process has a number of parallels with the petroleum alkylation process, except that in this case, linear alkylbenzene (LAB) is produced. This is used mainly in the manufacture of linear alkylbenzene sulphonate (LAS) detergents for laundry and dishwashing applications.

In both petroleum and detergent applications there is some loss of catalyst due to conditions of operation. This means there is a continuing demand for hydrogen fluoride. 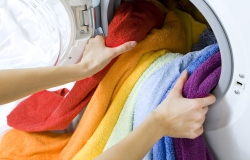